Sign Now!! Joint Urgent Statement of NGOs Opposing the Construction of a New Military Base at Henoko

Why Protect Henoko?
Henoko, Oura Bay is the habitat of dugongs and beautiful coral reefs that have taken many years to form. The complex topography and the two rivers from Yanbaru Forest that flow into Oura Bay produce a rich marine ecosystem. Indeed, the Oura Bay is exactly what the international community is talking about when referring to high conservation value (HCV) ecosystems that should be protected. But it is right here in Oura Bay that land reclamation work is proceeding at a fever pitch for the construction of a new U.S. military base. Only candidates who ran on platforms opposing a new base were elected last year as the new mayor of Nago City, governor of Okinawa Prefectural, and members of the national House of Representatives. The position of the Okinawans is obvious through their votes in these elections. 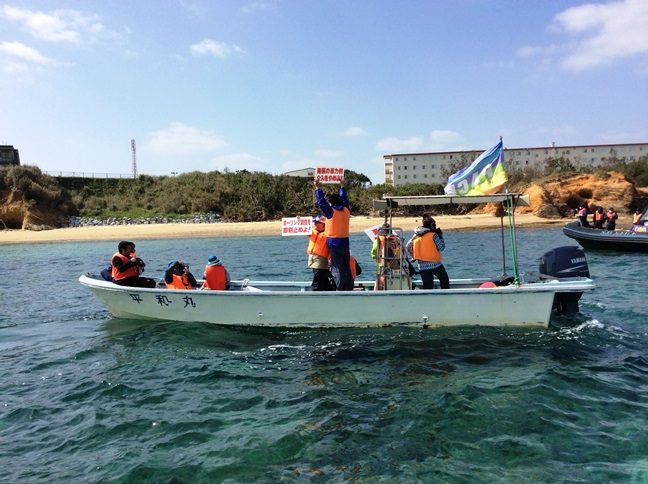 The Current Situation at Henoko, Oura Bay
Okinawa’s prefectural governor, Takeshi Onaga, has established an independent committee, and started reviewing paperwork and contracts connected with this construction work. Additionally, he has requested that the Okinawan Defense Bureau suspend landfill operations until this review has been completed. However, his requests have been ignored, and huge concrete blocks are being dropped into the ocean to secure floats to demarcate a work control area, with the claim that a temporary pier is required for seafloor drilling tests. The work now under way is for construction of a huge “temporary” pier 25 meters wide and 300 meters long. The Defense Bureau has stated that the pier would be used for seafloor drilling, but similar testing in the past have never required such large-scale facilities. Various documentation raises suspicions about what is going on here, including “Public Water Reclamation Procedures” and an “Application for Permission Destroy Reef.”
Many people in Henoko are opposed to the building of the new base and the land reclamation work. They are showing their opposition through persistent demonstrations and protests, including protesting from boats and canoes, sit-ins at temporary camps, and 24-hour surveillance in front Camp Schwab (US Marine Corps) to stop construction vehicles.

FoE Japan’s Actions
FoE Japan is opposed to the ecosystem destruction and the construction of a new base, from the perspective of preserving and protecting Henoko’s valuable ecosystems. The construction is taking place with blatant disregard for the opinions of the citizens. To help protect Henoko, FoE Japan is harnessing its advocacy experience and collaborating with the citizens of Henoko (and Okinawa and beyond), various groups and experts to accomplish the following:

• Inspection of legal documents used to approve the construction
• Discussions with the government, organization of public meetings
• Reaching out to Diet members and the media
• Supporting and assisting surveillance at Henoko, Oura Bay and Camp Schwab
• Sending information out internationally