The top objectives of this program are the phase-out of nuclear power and realization of an "energy shift" by promoting energy conservation, energy efficiency, and renewable energy. Here is a short description of our activities.

After the Fukushima nuclear disaster of March 2011, responding to the strong citizens’ movement calling for the phase-out of nuclear power, the former administration ( Democratic Party of Japan, or DPJ) declared Japan’s plan for a nuclear phase-out by the 2030 s. But then things changed. The ( Liberal Democratic Party ( LDP) returned to power with an election win in December 2012, declared it would review the nuclear phase-out policy, and then it announced it would restart nuclear plants and promote the export of nuclear energy. 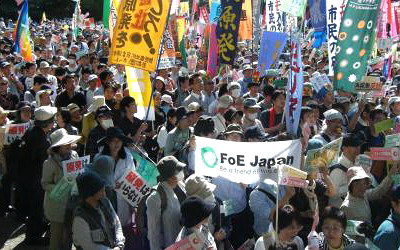 Despite this political situation, most people in Japan still support a nuclear phase-out. FoE Japan played an important role conveying these public sentiments to the Japanese government with our “public comment campaign” during the summer of 2012 through the nationwide network “e-shift.” In cooperation with other citizens’ groups, FoE Japan has been engaged as a lead group in a public campaign that focuses on the economic benefits of phasing out nuclear power . It is called the “Zeronomics campaign” in parody of “Abenomics” (the pro-nuclear economic policy of Prime Minister Abe).

FoE Japan has also served as a watchdog for the newly established Nuclear Regulation Authority (NRA), which is in charge of establishing new regulations for the restart of nuclear power plants and disaster readiness plans, etc. Because of FoE Japan’s contribution in raising the issue of the seismic fault zone under the Oi Nuclear Power Plant, several parliamentarians and experts also conducted their own research on the issue , and gave their findings to the NRA. FoE Japan has established the Civil Association for Observation of Nuclear Regulation in order to constantly monitor the NRA’s activity and hold it accountable.

FoE Japan also contributed to the establishment of the Children and TEPCO Nuclear Disaster Victims’ Support Act, which was enacted in June 2012. The Act has not fully entered into force, but FoE Japan serves as secretariat of the Citizens’ Forum for the Children and Victims’ Support Act. This is a nationwide network of victims, evacuees, support organizations, lawyers, and local politicians. The Forum aims to realize full implementation of the Act.

FoE Japan also advocated for reducing the risks of exposure to low-dose radiation by calling for changes in methodology of the Fukushima Health Management Survey and asking the Japanese government to take more responsibility for residents’ health care by adopting the precautionary principle. FoE Japan established the Citizen-Expert Committee on Radiation Exposure and Health Management, which is an independent committee for realizing a better health care system for nuclear accident victims.

In addition, FoE Japan, in collaboration with other citizen’s groups, has tried to show an alternative approach to reducing risks of low-dose radiation, by implementing a pilot project (Fukushima Poka-Poka Project) for children from the contaminated areas.