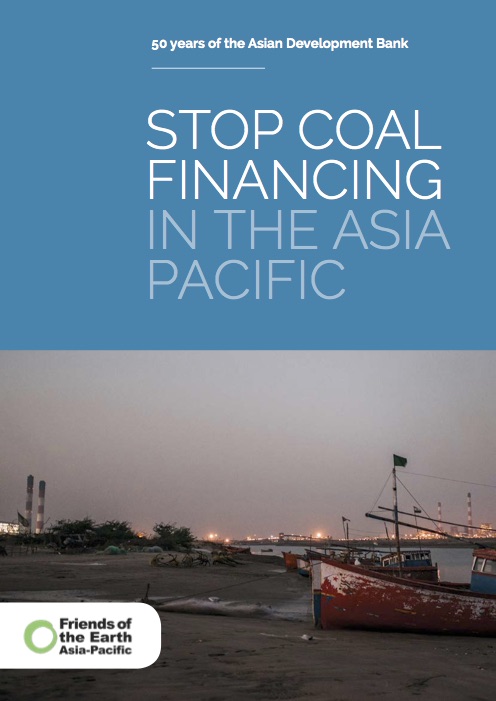 Friend of the Earth Asia Pacific today released a report calling on the Asian Development Bank (ADB) to cease all funding of coal projects, saying that their current climate and energy policies are incompatible and hypocritical.

This year the ADB turns 50, and in the last ten years alone has financed over $3.9 billion in coal projects across the Asia Pacific region and was one the largest international public financiers of coal. Friends of the Earth Asia Pacific, a network of environmental and social justice groups across the region, says this must stop now if we are to avert dangerous climate change.

The Friends of the Earth report outlines the ADB’s previous funding of coal projects, its current policy to financially support coal infrastructure and its incompatibility with climate commitments including the 2015 Paris Agreement.

“The ADB claims to fully recognise the impact climate change will have on people in poverty in Asia is hypocrisy. Their 2020 strategy points out that climate change is a fundamental threat to alleviating poverty in the Asian region, and will put the lives of millions of people in Asia at risk. And yet, their energy policy completely disregards this,” said Hemantha Withanage, Friends of the Earth Asia Pacific spokesperson.

“Coal is one of the greatest drivers of dangerous climate change, yet the ADB refuse to rule out financing new coal projects. Instead they support new coal fired power stations, coal infrastructure projects and prolong the life of old power stations by investing in retrofitting projects. None of this indicates a commitment to action to stop climate change

“The ADB are now 50 years old, we are in the 21st century and we need a 21st century energy policy. Renewable energy technologies are available to meet the energy needs of 21st century Asia. We need to put communities, and especially poor and marginalised communities first, by investing in community-led renewable energy projects that meet people’s needs while addressing our climate commitments.”

“It’s time for the ADB to end this hypocrisy by banning all new investments in coal projects, and instead committing only to support community lead renewable energy projects” said Mr Withanage.